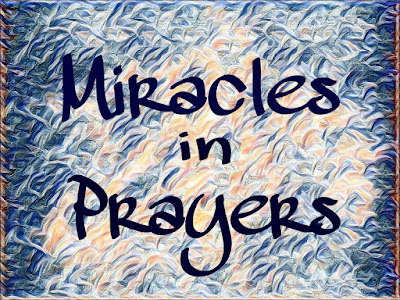 Growing up poor, I did not believe in miracles; I depended on miracles!


When my family and I were literally homeless, we prayed that somebody will take us. We did not have money to pay for even a month’s rent and there was no place to go. But on that same day, my mom, sister and I were able to home ourselves. Although we were able to find lodgings separately, we still did despite the seeming impossibility.


I was severely nearsighted growing up but my mother was only able to acquire prescription eyeglasses for me once in my entire life and that was in second grade. After that pair got lost, I was on my own in my blurry world. When commuting from my house to my school, I prayed that I might ride the correct jeep. I couldn’t read the signboard and taking the time to ask will deprive me of the opportunity to get a ride because mornings were rush hours and people literally kill each other just to be able to get inside a jeep. Miraculously, my intelligent guesses were always correct. I also prayed when crossing the streets that I might not die in the process. Obviously the prayers worked because I am still alive today.


When I took the college entrance exam for the University of the Philippines in Diliman, I was unfortunate to have contracted the flu on the very same day. I had a very high fever, I was dizzy and I felt like vomiting. The test room was unluckily air conditioned which made my feverish chills even worse. No one was allowed to leave the room, not even to vomit, during the entire test duration. I tried my best to toughen up and finish the entrance exams. At that time, this was the ONLY college entrance exams which my mom was able to pay so this was my ONLY hope. But after an hour of trying, I couldn’t hold off anymore the uncontrollable shaking from the chills and the need to black out and faint. Since the exam was multiple choices and you just had to shade the correct answer, I just decided to randomly shade the answer sheet until the very end just to get the test over.  I submitted my exam paper to the proctor and hurriedly went out to finally give in to the forces of the flu. I prayed that I might pass although it seemed highly impossible since more than 50 percent of my answers were just random guesses. YET miracles of miracles, I passed!


During the second semester of my first year in college, my mother was not able to come up with the tuition fee. It was already the first week of classes and I was still not officially enrolled. I prayed that we would be able to come up with the money. We didn’t, but a good friend of mine came up with the 7000 pesos as the initial payment just to get me enrolled. I was able to get my first year college second semester education even if the odds were against my favour. But this was not in fact my first tuition fee miracle. From my whole grade school years to my entire high school years, my mother enrolled me with just a promissory note promising to pay the unpaid debts from my previous academic years. Every year it was the same answered prayer for a seemingly hopeless situation.


By the time I met my then husband, my life story has been a series of answered prayers and impossible miracles. I really couldn’t have survived life without them. In fact, meeting my then-boyfriend-now-husband was also a result of an answered prayer. Julius was the exact replica on my husband prayer wish list. In every sense of the word, he was God sent.


As a couple, we had our fair share of needing miracles during our first year of relationship. Julius’ place of employment was on the decline and they weren’t receiving their salaries for months. Even during deployment to job sites, they had to use their own resources. There was even a time when he was stuck somewhere because his company was not able to provide him with an airfare to go back home. Even without a tangible source of employment opportunities, we prayed that Julius can find another place of work. We prayed a novena to Blessed Jose Maria Escriva for months. We stubbornly insisted on our demands and we were not taking no for an answer from God. And just like that, Julius found a job in Dubai. Although we were praying for a job opportunity from the U.S. of A, God found it more appropriate to send us to the land of the Arabs.


From then on, our life was free from desperately praying for miracles. If we were sick, we had our company issued comprehensive insurance which not only provided doctor consultation and laboratory test but also dispensed medicines at a very minimal participation cost. We were never in dire need of food, shelter or clothing at any point in time because we had good stable jobs. If there was any financial emergency, all we needed to do was adjust the budget for a few months and then get back on track again. We also saved for an emergency fund so that we will never be caught with our pants down. We were self-sufficient and had no need for any last minute miracles to save our ass. There was always a logical and doable solution from our part to any problem.


But the risk of getting results from the realm of the possible is that soon, you lose touch with the possibilities of the impossible. I, whose life was painted with the colours of miracles, have subconsciously stopped believing in them. I solely relied on the limitations of my possibilities rather than rely on the infinite impossibilities of the universe. It kept me grounded, which is actually a good thing, but it also clipped my wings which I needed to fly. As the years went by, my roots grew deeper and deeper until I completely forgot that I once knew how to soar.


But God, with his amazing wisdom, decided to give me back my wings. After more than 10 years of being grounded, my husband lost his job. To add spice to the mayhem, I found out I was pregnant after a month and the rents and other cost of living all suddenly decided to shoot up at the same time. We had also lost our company sponsored health insurance. For the first time in our whole years living abroad, getting suddenly sick was a terrifying and expensive prospect. Since I was also pregnant, prenatal check-ups and giving birth were now my financial burden.


As great timing would have it, my 9 year old son also had a minor accident. He fell down while at school and his fingernail lifted off from the fingernail bed. Although we were insurance free, we were fortunate that the accident happened in school because then we would be entitled to free emergency care in one of the government hospitals. Although totally grateful for the free medical assistance, we felt so powerless because we had to rely on the charity of others. Beggars can’t be choosers and in a free facility, you wait until somebody attends to you.


After more than 10 years of being in control, I was no longer at the helm of my life. There was no logical, practical, doable solution on my end. We were caught with our pants down and suddenly, I was in need of miracles. It was hard to pray and believe that God will answer my prayers. I was calculating the number of people who lost their jobs and the current job market.It seemed impossible to be hired at the current status quo.


I was in a state of bottomless panic. If my husband will not be able to find a job, we will all be forced to go back home to our motherland since visa’s can only be obtained via the sponsorship of an employer. As hard as it is to look for a job abroad, it is a million times much harder to look for a job in the place where we were born. The job market there is ruthless and has little or no compassion for the aging job hunter. I still have a 9 year old son to support and another one on the way. Where will get money for food, for shelter, for education and for other basic needs? If it was just me and my husband, we can just wing it since we are both used to poverty. But we have two lives that depended on us. We cannot just wing it.


Months have already passed since the day my husband lost his job and our life of uncertainty began. At this point, I’m still learning to spread my wings. Although he has already found a job, which was a big hurrah, our life was no longer in the comfort zone and thus need constant reliance on the supernatural and the impossible. In some ways I believe that my family needs this mayhem of uncertainty more than stability. Although our lives are no longer comfortable and secure, we were given in exchange the capacity and openness to believe in the impossible and infinite.

Because sometimes, the greatest gifts in life are struggles and problems. Without them, there is no room for miracles.

Posted by Maria Maquiling at 9:15 PM